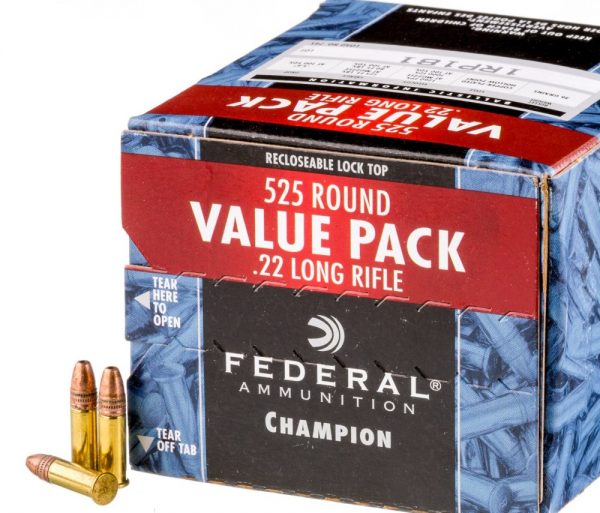 Firing a gun chambered in .22LR is fun; it doesn’t matter who you are, or how much or how little experience you have. You’re going to have a good time. Because of that, .22LR shooters know they need to have a sizable stash of ammunition, which is why this 5,25 rounds box is absolutely perfect. You’ll burn through this entire box faster than you can possible imagine, so you might want to consider buying at least two. One box will enable you to have an awesome day plinking with your .22, two boxes means you can set one aside for later, and three means you can add to your stockpile (or start one) without hindering your current shooting abilities.

This .22LR is manufactured by Federal, a company founded in 1922 by Charles Horn. For almost 100 years, Federal has been producing ammunition at their Anoka, Minnesota, plant under the watchful eyes of their trained team. Throughout those generations they’ve gained experience and knowledge in all things ammunition-related, and as a result they’ve come out with these great rounds. Because they’re CPHP, they have two fantastic features: the copper plating helps to keep your gun cleaner, and the fact that they’re hollow points means they expand slightly on impact. Some fans use these for varmint control while others stick to target practice and plinking.

You want your .22LR to be speedy, and at a reasonably lightweight 36 grain, this ammunition is certainly fast. It has a muzzle velocity of 1,260 feet per second, so if you’re using it for varmint control, you can be sure it’ll reach your intended target without delay. It also has a muzzle energy of 125 foot-pounds, and that combined with the fact that these are CPHP’s means one well-placed shot will take care of your pest problems. 5,25 competitively-priced .22LR’s from an American-made company – what more needs to be said? Get your order in right now, because you know you need some .22LR’s.