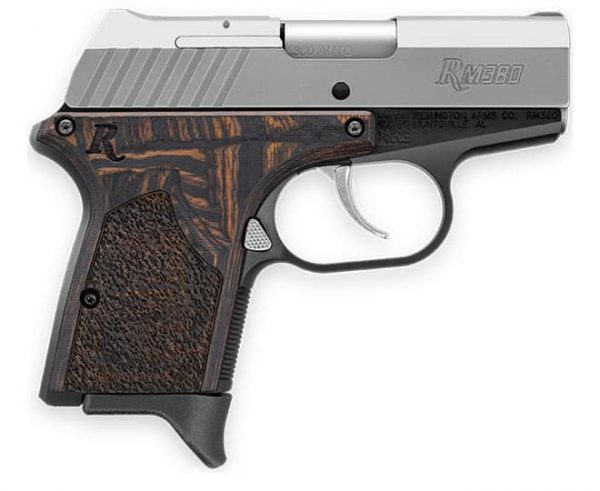 At first glance you might think the Executive’s grip panels are wood, but closer inspection shows the grips are actually a high-pressure wood-grain Macassar laminate. They also feature a large palm swell, which helps fill the shooter’s hand and provides better control of the gun when firing. The Executive’s grip panels are replaceable and can be removed from the gun by loosening three small screws.

It’s worth noting this pistol’s double-action, hammer-fired design has one advantage that striker-fired counterparts do not. In the rare event a shooter encounters a cartridge with a hard primer, hammer guns allow the shooter to continue striking the primer with additional pulls of the trigger.

As I mentioned, the Executive is designed with concealment in mind. This end-use engineering is apparent in every aspect of the gun’s design, from the beveled slide to the minimalist machined sights to the recessed controls. The rear portion of the slide is angled forward, and the spurless hammer rides flush against the back of the gun.

A small beavertail prevents the shooter’s hand from being bitten by the slide during cycling, and a small undercut on frontstrap checkering helps maintain control of this pistol when firing. The laminate grip panels are textured and feature a shallow recess on either side just aft of the trigger guard.

In terms of controls, there is no manual safety or takedown lever. An ambidextrous, triangular magazine release button is contoured to the grip profile, and the low-profile slide stop rides in a cutout on the left side of the grip. The trigger, extractor, slide stop and mag release are nickel-plated.

Wide serrations machined into the rear of the slide makes for easy operation of the pistol even with gloved hands. Takedown is relatively simple. With an empty chamber and the magazine removed, pull the slide rearward until a round hole in the slide aligns with a longitudinal pin that can be pushed free.

Be the first to review “Remington RM380 Executive” Cancel reply